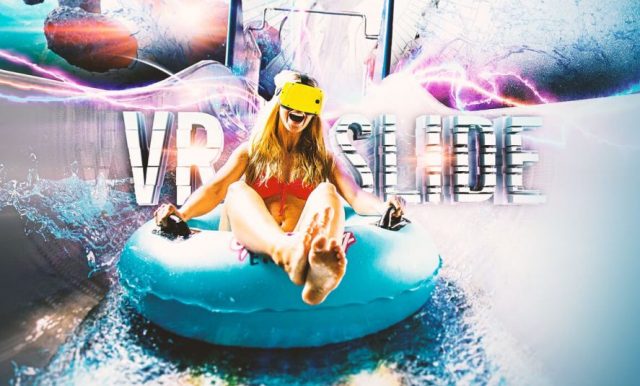 Augmented reality, Virtual reality, or mixed reality, these days there is a lot of buzz surrounding any aspect of artificial reality. If we talk strictly about VR headsets, they are mostly deployed in entertainment environments like console gaming, video streaming, and even roller coasters. Now if you notice the trend, VR-equipped water parks were always on cards and now the world’s first VR water slide is open for public and is aptly named VRslide.

If you have any reservations about the use of those delicate VR headsets in a wet and rough environment of a water slide, be assured that the company has taken all the requisite measures. VRslide uses custom headsets that are waterproof and can even be fully submerged in water. For the VR-effect, it uses Galaxy S8 integrated inside the headset that runs custom software. Also, the headset is capable of two-motion tracking that can detect all movements of users can tailor the VR content accordingly. So, when you slide down wearing one of those headsets, it would create an illusion of sliding in space for you or from snow-capped mountains, or something similar. Yes, it isn’t a groundbreaking innovation but the tech is surely impressive.

However, as impressive as it is, even the prospect of its existence is dull. Roller coaster or water-sides are in themselves an adrenaline-pumping activity and the prospect of creating an artificial reality simply beats the core purpose of these activities themselves. Moreover, these places are more about group activities that VRslide turns into a personal indulgence.

You May Like: Playstation VR 2 Expected Release Date, Price, And More

But hey, we aren’t saying that sliding down the VR water slide won’t be fun. If you happen to live in or are planning to visit Erding, Germany, make sure to mark it in your to-do list!