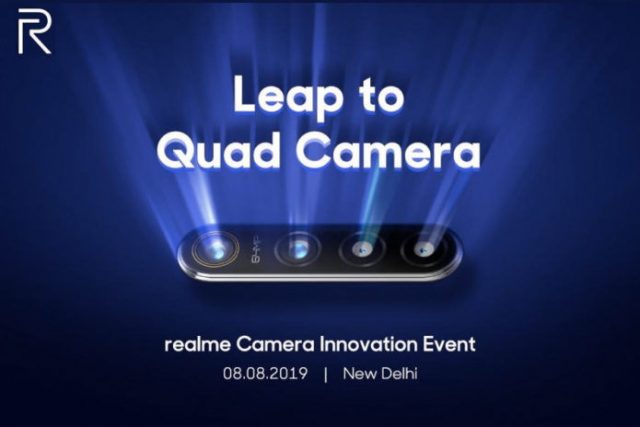 Realme has officially announced that the company is going to take off the curtain from the 64-megapixel camera technology on August 8. Realme is organizing the event on August 8 in the capital Delhi and the platform of this event will be introduced to the world for the first time with 64-megapixel camera technology. Giving information through its official tweeter handle, Realme has stated that the company will showcase the 64MP Quad Camera phone at the ‘Realme Camera Innovation Event’.

Realme’s tweet shows that the company will not launch any new phone on this day, but only 64-megapixel camera technology will be displayed. The quad-camera setup shown in the tweeted image by the company has been shown. That is, the prototype phone used in camera technology to be offered on August 8 will support 4 rear cameras. The technology to be displayed in Realme Camera Innovation Event will be used in Realme’s flagship smartphone in the coming days. Speaking about the realm’s 64MP Quad Camera technology, this technology can capture the ultra-high pixel image of 9216 x 6912 resolution from this technology as per the information so far. The camera with a 64-megapixel camera will have four camera sensors on the back panel. In the vertical shape on the left side of the phone, a rectangular ring will be given in the vertical shape and in this ring, all the camera sensors will be in line. The camera sensor at the top will be placed inside the gold color ring. And under this first sensor, it will be written 64MP. The 64MP Quad Camera setup will have a flashlight on the right and this camera setup will also be equipped with AI FEATURES.

How 64MP Camera Will Work? Let us know that the new ISOCELL Bright GW1 technology introduced by Samsung is made in coordination with pixel-merging Tetracell technology and remosaic algorithm. Combining these two advanced technologies, this Samsung camera sensor clicks a 16-megapixel photo in low light. This sensor captures 4 photos simultaneously at 16-megapixels and combines four different photo files to create a 64-megapixel photo file.

In addition, the ISOCELL Bright GW1 camera sensor also supports Real-Time High Dynamic Range (HDR) up to 100-decibels (dB). Due to this, the photo taken from the phone gives a very high-grade hue and all the colors in the captured photo are very clear and sharp. Samsung’s camera sensor technology is equipped with dual conversion gain (DCG) which converts the light coming into the camera into an electronic signal.

Samsung’s camera sensor changes the electronic signals, brightens the photo in a balanced manner by optimizing this light through full well capacities (FWC). Due to this camera sensor technology, this upcoming smartphone of Realme will be able to make full HD slow-motion video at 480fps speed. Along with this, the smartphones will also be equipped with state-of-the-art technology like High-Performance Phase Detection Auto Focus Technology (Super PD).