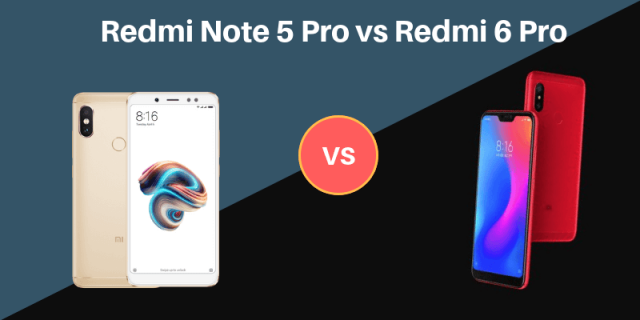 In post, we are going to discuss which is the best mobile between Redmi Note 5 Pro vs Redmi 6 Pro:Earlier this year in February, the Chinese smartphone maker Xiaomi kicked up a storm with its new launch- Redmi Note 5 Pro, featuring a powerful Chipset and impressive dual-camera at an unchallenged price point of 16K. Since then, other companies have largely caught up with their own devices with similar specs and a comparable price tag.  Now at its latest launch event for its Redmi 6 series, the company has again pulled off the same trick.

As you may already know, the Redmi-series is Xiaomi’s low-cost devices generally priced at around 6-9K for different variants. But this time, there is a new variant priced at 13K- with almost the specs as the Redmi Note 5 but drastically undercutting all its competitors. Let’s first take a look at the spec sheet then we’ll get down to the differences. Have a look on Redmi Note 5 Pro vs Redmi 6 Pro.

There are basically four marked differences between the devices- display, chipset, front-camera, and the price. We’ll get down to each one of them:

Both the devices have displays of basically the same size and resolution except for one marked difference- the notch on the Redmi 6 Pro. Now given the controversy around this new design, there is no use favoring one over the other.

Redmi 6 Pro is one of the handfuls of the devices to bring Snapdragon 600-series chipset to such low price point but the SD 625 is now over a year old and Redmi Note 5 Pro is powered by its successor SD 636. This gives the Note version a slight edge.

While both phones feature the same dual-lens setup at the back, Redmi Note 5 Pro has a superior 20MP camera at the front while the Redmi 6 Pro is left with only a 5MP camera.

This is where it truly gets exciting, if we compare the upper model of Redmi 6 Pro with the base model of Redmi Note 5 Pro, both the devices have the same memory and a price difference of only 2K. In this 2K, you either opt for a slightly powerful chipset and better front camera or you can save that 2K while still having a trending notched display.