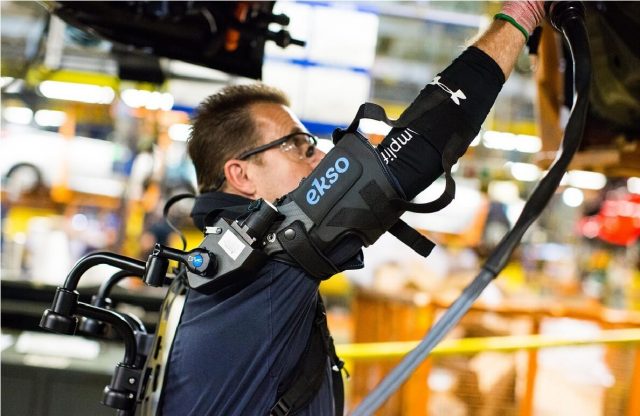 Robots in the past have replaced humans for most of the tasks especially when there is a lot of labor work is involved. This time around the automotive giant, Ford and the pioneer of robotic exoskeletons, Ekso Bionics have come together to transform the labor-intensive automotive industry.

Ford has stepped up to fight against the undesirable injuries, fatigue and millions of repetitive tasks that are bound to happen on an assembly line. It has been found that some workers on the assembly line lift their arms an average of 4,600 times per day or about 1 million times per year.

The company is presently testing upper-body exoskeletons at two of its US factories. The four EksoVests were designated to two workers each at company’s Wayne and Flat Rock factories. The cost of producing exoskeletons and the partnership deal between the two parties Ford and Ekso haven’t been disclosed. The four testing exoskeleton vests were paid by United Auto Workers union. Ford plans to test these vests in other regions as well including South America and Europe in the coming months.

The whole idea behind the partnership is to aid workers while they perform overhead tasks. EksoVest will support the worker to lift a load of up to 15 pounds per arm, reduce the strain on his body, keep fresh and charged throughout the day and diminish the chances of getting injured.

“The idea is to demonstrate this isn’t science fiction, it’s real and it has real value. As we prove its value, we will be able to expand into other tasks,” said Russ Angold, Ekso’s CTO (Chief Technology Officer). He further added that it is to get workers used to the technology before making EkoVest, a mainstream.

Marty Smets, the Ford ergonomics engineer and in charge of testing the EksoVests said, “We have made great progress, but shoulders are still our number one injury and they take a lot of time to heal.”

The automaker has taken several steps over time to diminish its workers’ injury rates and has succeeded too. It has been recorded that Ford managed to reduce injuries and incidents by 83% from 2005 to 2016. And now with the partnership with Ekso Bionics, it has taken the level of concern towards its workers to an entirely new high.

A worker at Ford’s Wayne plant, Paul Collins had been chosen to try the EksoVest. He was supposed to wear the vest from May to August 2017, but now he is in no mood to return it. That clearly depicts the capability of the technology-powered vest and the level of ease it adds to a worker’s life.