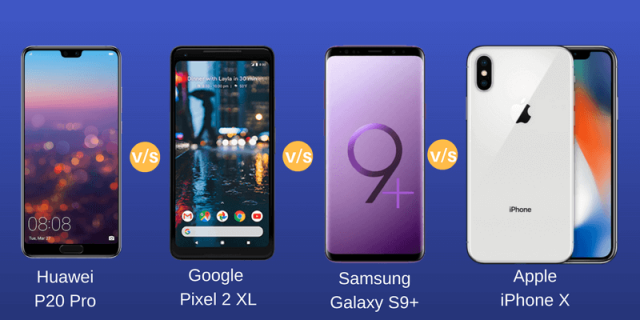 Like in mobile OS platforms where Android and iOS have a virtual duopoly, the hardware segment too hasn’t been much different. Apple’s flagship set the benchmark each successive year and Samsung challenges it with the best of Android. Then Google came with its own Pixel lineup and kick-started a triangular competition. And now with the Chinese giant Huawei’s latest release, it’s definitely a quad. To put it in the simplest of terms, iPhone X from Apple, Galaxy S9+ from Samsung, Pixel 2 from Google, and P20 Pro from Huawei are currently the top handsets in the market. But who among them is the best?

This comparison is even more interesting because all of them are powered by different chipsets. In fact, Apple, Samsung, and Huawei make their SoCs while Google relies on market leader Qualcomm. Plus in terms of interface, despite the latter three devices running Android, they are as different as it gets. But for the sake of objectivity, we will stay clear of the design and interface as they are largely subjective and depend on individual preferences.

Huawei P20 is the clear loser here with its FHD display while all the others sport QHD displays. For the rest, due to the variance in screen size, we can use the corresponding PPI to get this order- Galaxy S9+ > Pixel 2XL > iPhone X

This one’s really tough to compare because all of them use different hardware and benchmarks don’t reflect in real-world usage. Still, given that Pixel uses quite an old SoC, it will fall behind the others. Then comes the P20 Pro- in limited reviews, it has shown to have some lags during extensive gaming. So it takes the 3rd spot. For the top spot however, there is no clear winner. Don’t be fooled by the low RAM in iPhone X as the chipset and the OS highly optimized to be power and memory efficient. This one is a tie between S9+ and iPhone X.

Huawei P20 Pro absolutely takes the cake here. With three sensors from Lecia, one of which is an enormous 40 MP and all with OIS, no smartphone can currently beat this device in the camera segment. For the second spot and it may come as surprise to many, is the Pixel 2 XL despite its single lens. Just like the last segment, iPhone X and Galaxy S9+ are again on a tie but this time for the bottom two spots.