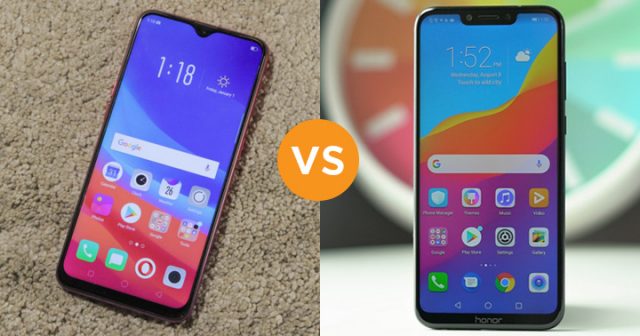 The Indian smartphone market is currently flushed with smartphones at all price points. And while dozens of phone brands register their presence in the market, a majority of it has been cornered by Chinese brands- Xiaomi maintains the lead while Oppo and Huawei battle for their spot. Both the companies are fiercely competing on the 20K price segment- the latest addition to which are Oppo F9 Pro from Oppo and Honor Play from Huawei. Let’s take a look at Honor Play vs Oppo F9 Pro comparison, how they stack up against each other:

Depending on how you expect your phone to look, you might find the design of Oppo F9 Pro gorgeous or funky- something similar to Huawei’s flagship P20. With different color gradients and a distinguishing pattern, the phone certainly has its own signature. As for Honor Play, there is nothing special to mention. You get the same (unibody) metallic design that you find classic or boring.

Which One is the Best: OnePlus 6 vs Honor 10

Both the devices come with a notched display but with a notable difference- F9 Pro sports a dot-like notch, like Essential phone introduced them while the Honor Play has the common bar-like notch- much like what iPhone X helped popularize.

Both the devices are identical in this aspect with a 6.3-inch IPS LCD capacitive touchscreen having a PPI of 409. But if you like nitpicking the details, both of them have a resolution of 1080 x 2340 pixels and 19.5:9 ratio. F9 Pro, however, has Corning Gorilla Glass 6 for screen protection, hence giving it an edge.

Now, this is an area where Honor Play is way ahead of F9 Pro owing to its top of the line Kirin 970 chipset. While it is almost shocking to see the company throw away its best CPU at this price point, the recently released Pocofone with a similar USP suggests at a larger upcoming trend. Oppo F9 Pro, on the other hand, has what you’d expect- a mid-range chipset- Mediatek MT6771 Helio P60. While both phones run the same Mali-G72 MP12 GPU, the sheer power of processor means Honor Play will better handle all the tasks.

Both the phones come with 64GB internal storage with two variants of 4GB and 6GB RAM. Both of them support microSD cards up to 256GB but with one considerable difference- while F9 Pro has a dedicated slot, Honor Play comes with a hybrid slot. So, if you are a user who needs more than 64GB storage and must use two SIMs, this can be a deal breaker.

There is dual-lens set up of 16MP+2MP in both phones but if we know anything about cameras, we can say that pixels don’t mean everything and real comparison can only be made once they are widely available.

Honor Play has a selfie camera of 16MP while F9 Pro comes with 25MP sensors, while this major gap goes in favor of Oppo, we’ll reserve our judgment for now.

Both the smartphones run on Android 8.1 (Oreo) with their own custom skin on the top. Honor Play comes with EMUI 8.2 while F9 Pro has ColorOS 5.2. a comparison between the two deserves a piece of its own but the general consensus remains that EMUI is a much more matured skin. But still, it’s a matter of personal preference.

Overall, if you are looking for a good looking phone, with a large memory requirement, and want to take better-looking selfies, you should go with Oppo F9 Pro. But if you want a phone with high-end performance with decent hardware, Honor Play can become your ideal purchase.