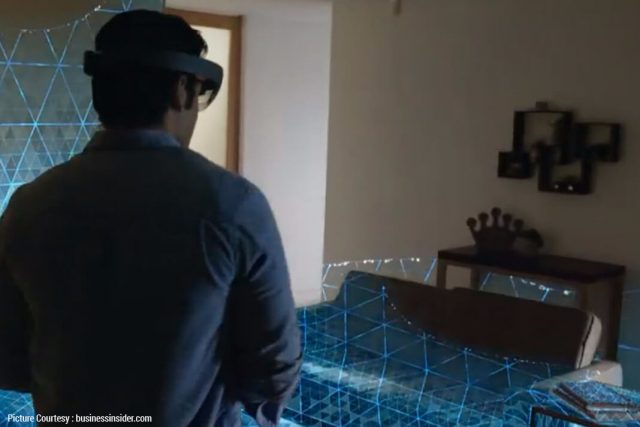 Amazon is out with an amazing Augmented Reality system that can let you convert the way your surroundings appear to you without using a headset. With advanced AR components playing a pivotal role in transforming your vision into augmented reality without wearing the awkward headset you can expect the product to be one-of-its-kind AR equation to go with.

Amazingly planted across the milieu of your living room through high definition virtual objects and reflections supported by a confined and controlled projector-camera setup, you experience something unlikely to what we have been seeing till now in the AR range.

As they define it “Augmented Reality Functional Node”, ARFN in short, can be placed anywhere (on your wall, ceiling, or maybe a table) to beam content on a certain surface of your room. The various components of these nodes include a projector, computing devices, a camera and other sensors, collectively cover the purpose to offer a great Augmented Reality feel. This AR product by Amazon is all equipped to support different types of media. This means you can use it in any party event or any special occasion to propose a composite theme of your choice supported by selective sound, pictures, videos and other AV elements to blend in with your environment. As per the reports, one of the patents is called “Object Tracking in a 3Dimensional Environment”. It allows you to use cameras connected with the nodes to be used for controlling virtual objects as per your preferences applying different gestures.

Another device is based on the concept of “reflector-based depth mapping of a scene” and uses lights to measure dimensions of the intended objects it is capturing and beam AR scenes to track and depict what is happening in a room. “The projected content may include electronic books, videos, images, interactive menus, or any other sort of visual content. For instance, a user within the environment may request that the Augmented Reality Functional Node project a particular electronic book that the user wishes to read. In response, the ARFN may project the book onto a projection surface within the environment,” the tracking patent states.

Well, with that all being said, it is quite apparent that these patents are not going to accompany the regular goofy headsets, but they are surely going to have some sort of headgear to make all that work.