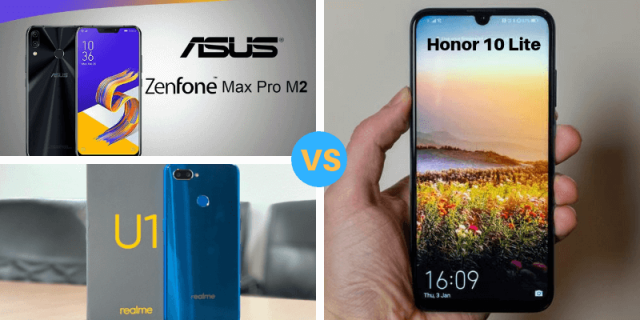 These are perhaps the best times for being a mobile consumer. The handsets that might cost a fortune just a few years ago are today available at dirt cheap prices. Special courtesy to Chinese brands like Huawei, Oppo, Xiaomi, Vivo, etc, the problem that consumers face isn’t the lack of good handsets but the abundance of it. So much so that sometimes it becomes absolutely numbing trying to decide which phone to buy. Take the latest launch of Honor- Honor 10 Lite for instance. It is an absolutely good phone for its price tag but is it the best?

Looking at the phone, one can’t possibly say that these designs belong to the 10K-15K segment. The colorful textured body of all the three devices has a premium look with glass on the front. There are some notable differences though- Zenfone a broad notch and a slightly larger chin while the other two devices sport what is called waterdrop notch with minimum chin at the bottom. The Zenfone is also the heaviest among all the tree but the difference is too small to be noticed.

All the three devices sport IPS LCD display of almost the same size and resolution but Zenfone takes the lead here due to Corning Gorilla Glass 6. Realme UI has Gorilla Glass 3 while Honor 10 Lite doesn’t have such protection.

As for the processing power, it’s quite tough to compare them as all three of them use different chipsets. The Zenfone is powered by Snapdragon 660, Honor 10 Lite by Kirin 710, and Realme U1 by Helio P70- all three being mid-range processors from Snapdragon, Huawei, and MediaTek respectively. However if benchmarks are to considered, Zenfone might come on the top followed by Honor 10 Lite leaving the third spot for Realme U1.

In the camera department, Zenfone has the highest pixel count while Honor 10 Lite and Realme U1 have the same. Though, the Realme’s camera has a larger aperture promising better low-light pictures. That said, all three phones take a pretty decent picture but nothing you can boast about. For selfies, Realme UI has an impressive 25MP camera but then again, you shouldn’t expect much.

Now the winner in this segment depends on your preferences- whether you like a clean interface or a few extra features. The Zenfone runs stock Android 9 offering a clean interface while the other two devices run their own custom skins- EMUI on Honor and ColorOS on Realme. It is worth mentioning here that even if you go for a custom skin, Honor’s EMUI has much better reception than ColorOS.

With Zenfone Max Pro M2, you’d get a massive 5000mAh battery and Bluetooth 5.0 while the other two have smaller batteries and Bluetooth 4.2. But then the textured color variants of Honor 10 Lite- White, Black, Blue, and Red easily trump the others.

As you may have noticed, Asus Zenfone Max Pro M2 does carry an edge over other two devices. But if you want a really good looking phone with comparable features, Honor 10 Lite would be a good match. Sadly, Realme U1 seems to lag in virtually all segments except its selfie camera. That is, if you intend to take a whole lot of selfies, you can opt for Realme U1.