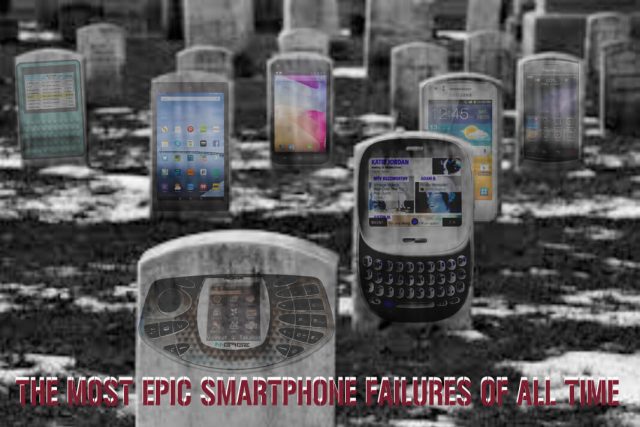 The graveyard of technology is filled with the stories of smartphones which when tried to bring something new, had to face nothing but cold rejection and ultimately embarrassing death. It is upon their graves that modern smartphones stand, flaunting their technological supremacy, which we all have come to love.

But the journey to this point hasn’t been a smooth ride. From initial struggles to balance existing technology with user aspirations, to subsequent assassination attempts at iPhones through various iPhone killers, many companies have tried their luck in the industry. While some of them still stand tall, others have been lost in oblivion. So lets take a step back to look at some of the smartphones that promised to revolutionize the mobile industry but were themselves crucified:

This story goes way back in 2003 when there was no such thing as iPhone and Nokia was a prominent name in cell phone industry. What was however popular those days were gaming consoles and mp3 players, mainly due to the refreshing products by Nintendo and Apple. So Nokia thought how hard it could be to pack those all into one device and in the process achieve some glowing success. And when it did, the final product was no less than an abomination.

While the device was marketed as a phone-cum-gaming console-cum-mp3 player, in reality, it sucked at all three. To start with, the phone was designed like a typical gaming console and if you wanted to talk, you would have hold the phone side ways. As stupid as it sounds, it was even more embarrassing to actually use it. Additionally, the mp3 player too was missing basic features like fast forward, playlists, etc and consequently users didn’t find the device worth their money.

Having spent countless dollars, Microsoft has been in the phone industry for a very long time but has been routed at its every attempt to make headway. Not many people know that before its venture with Lumia (which in itself can be argued to be an expensive disaster), it had to face another debacle for its another phone- Kin.

The device came in two variants, one of which was square shaped and looked really cute. The phone, though not a complete smartphone, came with quite decent features including social media access and was supposed to target teenage users. But Microsoft made a huge miscalculation-

1. Teenagers don’t usually buy very expensive phones, which it was.

2. Even if they do, they are not fool enough to pay full price for half the features.

In the end, it was possibly one of the biggest failures by all standards and reported to sell only 503 devices before discontinuation.

From selling books to offering cloud solutions to flying rockets, there is little left for Amazon to conquer, except cell phones. Amid much anticipation and hype, it launched in 2014 its Fire phone, which had a few concepts borrowed straight from science fiction movies.

Over all, the product came with more than decent hardware plus exclusive features like 5 cameras, 3D display, etc. But as far as the smartphones are concerned, there is little a device can do if not supplemented by a strong app ecosystem. And that is where Google shut its door on Amazon from accessing its Playstore and consequently the device died within a year.

If you are reading this, chances are you are a Facebook user. So, would you like your Facebook feed to be broadcasted on your homescreen 24*7? Well, HTC thought it would be a great idea! And so came HTC first, also known as the Facebook phone, that aimed to cash-in the immense growth that it witnessed those days.

The phone in itself was just OK and didn’t offer anything new expect that Facebook thing. And what HTC learned the hard way is that people don’t want to use Facebook all day, every day. The phone however wasn’t discontinued immediately but was left to die a slow painful death.

Blackberry, once the unopposed leader of smartphone industry, now lies in dust and the launch of Blackberry Storm was probably the earliest signal to its upcoming fate. Back in 2008, when apple started to significantly eat into the market of Blackberry through its superior touch-display devices, in a hurry to counter Apple and guard its turf, it launched 3 phones within 2 months- one of which was Blackberry Storm, now touted as one of the single biggest disaster in smartphone history by many tech experts.

Dumping the iconic keyboard, the device came with a touch display that also worked when clicked, except it didn’t in both the cases. The software was incredibly buggy which made performing even the simplest of tasks a pain. Perhaps the only good thing about the device was that almost every phone sold were eventually replaced and nobody had to suffer.

Now this is something we don’t know for sure is even a phone or not. But since it had a screen, a keypad, accessed internet, and was delivered by wireless carriers, it ought to be! As the name suggests, this phone was built keeping Twitter at center and removed all other outdated services, including voice calls, texts, and those hundreds of other things you expect from any budget phone by default! Yes, this was a phone to operate Twitter and Twitter ONLY.

As silly as it sounds, there are users out there who do not wish to use smartphones for whatever reason but are hooked onto Twitter and would be the perspective buyers. But the thing is, if you build a device for one single service and somehow manage to even screw that up, there are no second chances. That is exactly what happened with Peek, the service it offered was simply terrible and missed a lot of crucial features like search. And that is the reason not only the device failed, but Peek as a company had to shut down its phone business few years down the line.

Yes, ESPN too had a phone! Through not for a very short time. Banking on its wide catalog of content, the idea was to offer the sports enthusiasts a cell phone where they could get the latest of sport updates, highlights and more from a well reputed source. The company leased the spectrum from sprint and jumped into the mobile business.

The phone in itself was quite basic and highly overpriced, so much that you could buy similar phone at quarter of the price at which ESPN was selling. And unfortunately, as enthusiastic were users about the sports, none reflected in its phone sales. The phone was eventually lifted off selves just after 9 months from its initial release.

Though Samsung today sells more phones than any other company, it too has seen its fair share of failures over time, the most prominent of which was the Galaxy Beam. Nobody really knows why Samsung thought putting a mini, low-resolution projector in everyone’s pocket was a good idea, and when it came up with such a device, it became clear that nobody was really interested.

Apart from the projector, the phone was built of highly outdated hardware and to fit the projector, the design was highly tampered which eventually made the device a lot bulky, even ugly by some measures. And it seems no one really needed a personal projector at the time, thus turning the phone into a big flop.

Being the only phone in Times ‘top 20 technological failures of all time’, really says something about the multitudes of disaster this phone managed to achieve. Launched by Steve Jobs himself, it was the first phone to be shipped with iTunes built-in and promised to bring the perfect amalgamation of much popular Moto Razr and Apple iPod. But unfortunately, it was worse than both those devices put alone.

The phone was on average, a decent purchase if only it didn’t suffer with intensely buggy software. The promise of bringing the iTune experience was also limited to storing just 100 songs, that too after going through the tedious process of putting them in the first place. The achievement of this phone however lies in the fact that this was the first and the last phone to be built in partnership with Apple, the embarrassing failure of which forced the company to come up with its own line of smartphones, better known as iPhones.

This was possibly the best attempt at turning the concept of modular phones into reality, but perhaps wasn’t good enough. Highly popularized by Google through its project ARA, modular phones are ones where each component comes as different modules and can be easily swapped. For instance, if you want to shoot better pictures, just swap the camera module for a better one. Do not like your screen? or the memory isn’t enough? All you need to buy are new modules and not a different phone.

As fascinating as it sounds on paper, it seems equally tricky the companies find it to implement. Riding on the hype of project ARA, LG launched its first modular phone with high-end features and modules for camera, audio, etc. The phone could have been a landmark in mobile evolution had it been supported through proper hardware components. But after Google dumped its project and no other company is interested in taking the concept further, it seems the only achievement of LG G5 remained that of bringing the concept of modular phones from laboratory to masses.