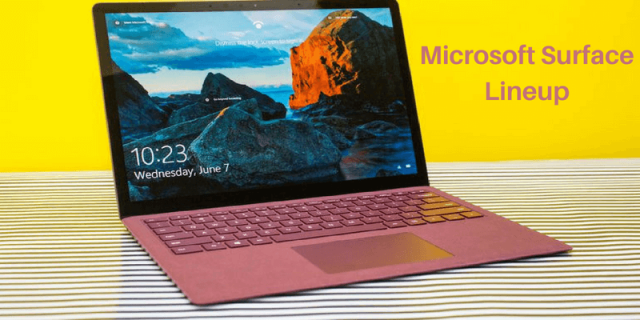 Microsoft has ruled for decades. It has ruled the market of personal computers but it was only in 2012 that it came with its first hardware- built to fully leverage its Windows ecosystem. It was a convertible laptop named Surface. And while it’s been six years since its initial launch, during which the company has vastly expanded its Surface lineup, it still remains the golden benchmark for every category it serves.

So if you want a hybrid PC, Surface is your best option. But with so many variants available in the market, which one would you choose? Let’s take a look at each of the offering to try and decide:

This is Microsoft’s flagship laptop that has arguably the best detachable design among all competitors. Aimed particularly for home and professional use, Surface Pro aces both in terms of aesthetics and performance. Especially if you bundle it with the Type Cover and Surface Pen, the look and usability of this systems takes a significant leap.

But for such top-of-the-self experience, you must also be ready to pay top bucks. While it does start at $800 for a low-end configuration with Intel’s slower m3 chip, 128GB storage and just 4GB RAM, the top model with an i7 processor and 16GB RAM and 512GB SSD will set you back by $1,900.

While the specs and the corresponding performance of top variant Surface Pro is more than enough for most users’ need, you opt for Surface Studio if you are not among most users. It is a 28-inch Studio all-in-one Windows PC that has an impressive resolution of 4,500×3, 000-pixel- which  is better than even 4K. The system is also ingenuinely designed to offer a 20-degree tilt. If we talk about specs, the variants range from decent to impressive.

There are just two problems- the 28-inch device isn’t exactly portable and the price is just too steep even for the hardware it offers. For instance, the top model comes with i7 processor, 32GB RAM, 2TB HDD, 128GB SSD, 4GB NVIDIA GPU, and more, which is impressive by all measures but just not impressive enough to justify the whopping $4,199 asking price.

If you intend to use your system as a normal laptop and not as a tablet, Surface Laptop is one of the finest in the market. Having a slim form-factor with an extended battery life, the device is suitable for both students and professional users with light usage requirements.

This is the latest device in Microsoft’s PC catalog launched particularly for students. Having a 10-inch screen with double-digit battery life, this $399 device is built only to perform basic tasks with its Intel Pentium processor. So, if you intend to do more than browsing and some documentation, there is a need to branch out your approach.