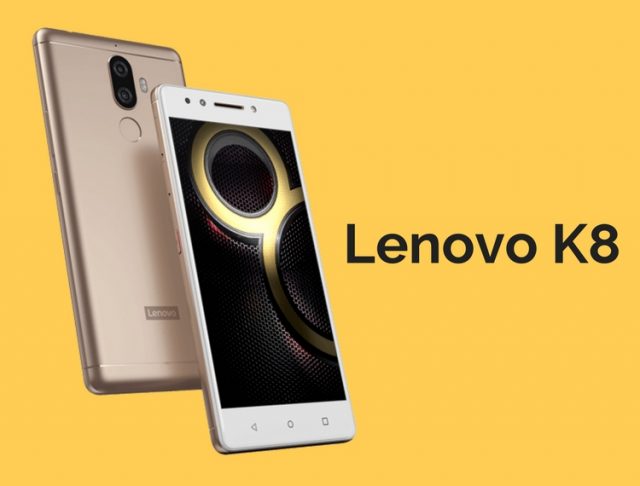 Lenovo, the Chinese multinational technology company has taken covers off its latest smartphone Lenovo K8. The model has been launched in the Indian market with fewer features and functionalities than the other two K-series models launched earlier by the company K8 Note and K8 Plus. Hence, it is the cheapest of the three smartphones.

This is the third K8-series smartphone, which will be sold only via retail stores. So, don’t bother yourself in finding online deals for the smartphone and visit your nearest Lenovo smartphones dealer in case you wish to buy it.

The Lenovo K8 comes with an octa-core Mediatek Helio P20 processor that is coupled with 3GB of RAM. It sports the screen size of 5.2-inch IPS HD (720 x 1280 pixels) display that gets an overlay of 2.5D glass.

On the storage front, it has an inbuilt capacity of 32GB, which can be expanded as per your needs. There is a fingerprint scanner at the back for you to quickly unlock the device with a tap.

On the outside, it sports a unibody design but is not all-metal. Instead, comes with several plastic inserts on the back. Plus, it has a dedicated Music Key on the left panel. At the back, it features a 13MP single sensor camera with LED flash while at the front, it sports an 8MP camera, which also comes with a flash feature. The sad part is that it doesn’t sport a dual camera setup like the other K-series smartphones including K8 Note and K8 Plus.

The Lenovo K8 Note has a 13MP sensor along with a 5MP depth sensor, which is a similar dual camera setup for the K8 Plus.

Like other K8-series Lenovo models, the K8 runs on stock Android 7.1.1 Nougat. Inside, it has a 4000mAh non-removable battery, which is powerful and can run up to 1.5 days before a recharge battery signal flashes. The smartphone supports dual-SIM functionality that can be utilized by inserting two Nano-SIMs.

The new K8 will be available in two color options, Venom Black and Fine Gold. In order to buy this smartphone, you need to spend INR 10,499.