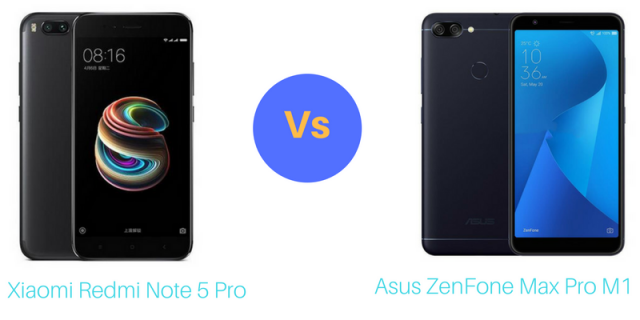 Xiaomi has now been the undisputed leader in Indian smartphone market for quite a while. So much so that if you want to buy a smartphone under Rs 15000, no matter which tech guru you ask, the answer would be the same- Redmi Note. And its latest launch- Redmi Note 5 Pro is no different. Pick any review and you will find it being hailed as the best-in-class, outperforming competitors by a long margin. But now it seems, we have a worthy contender challenging its supremacy- Asus ZenFone Max Pro M1 (could have worked better on naming the device).

To start with, the phone stands toe-to-toe with Redmi Pro in literally every dimension. The form-factor differs by a fraction of a millimeter and is lighter by 1 gram! Not that you will notice these microscopic differences but it reaffirms how close this battle is. Let’s first look at the similarities, then we will get down to where these two devices differ, and hopefully we get to pass a verdict in the end.

The Redmi Note 5 Pro comes with a 5.99-inch IPS LCD display with resolution 1080 x 2160 pixels, 18:9 aspect ratio and PPI density of 403. The display of Asus ZenFone Max Pro M1 also has the exact same specs except with a PPI of 402- not something that naked eyes can even notice! However, the display on Redmi is known to excel in terms of brightness while ZenFone is said to have better color saturation- not an advantage but a matter of preference.

Both the devices are powered by same Snapdragon 636 SoC (which by the way, is the best chipset for mid-range phones) and Adreno 509 GPU with the options of 4/6 GB RAM in Redmi and 3/4/6 GB in ZenFone. On the storage front, both the devices offer 64 GB of internal storage (ZenFone also has a 32 GB variant) which can be expanded up to 256 GB in Redmi and 400 GB in ZenFone- a difference you should mind if you need more than 256GB on your phone.

As is the standard these days, both the devices sport a dual-lens setup. The Redmi Note 5 Pro comes with a 12 MP (f/2.2) + 5 MP setup while Asus ZenFone Max Pro M1 has a 13 MP (f/2.2) + 5 MP setup. No, the one extra MP in Asus doesn’t really make a difference. Both the devices deliver pretty fine results with Redmi inching ahead in portrait and low-light shots while ZenFone takes a slight lead in color regeneration.

If you like selfies, then you will love Redmi Note 5 Pro’s 20MP front-camera in comparison to Zenfone’s 8MP. There is also something else- ZenFone is expected to offer a 16MP shooter in its upcoming 6GB variant- which if not bridge, will at least inch the gap closer.

At 4000mAh Redmi Note 5 Pro offered one of the longest battery-life. Now Asus ZenFone Max Pro M1 with its massive 5000 mAh battery takes a clear lead in the segment. Plus, one thing that needs special admiration is the fact that despite sporting such a large battery, Asus has managed to keep the size and weight of the device competitive.

For many people, the hybrid dual-SIM slot of Redmi Note 5 Pro remains a deal-breaker because they can use two SIMs and a memory card at once. If you are one of those people, ZenFone will be your natural choice as it supports dual-SIM and a separate MicroSD card slot.

Asus ZenFone Max Pro M1 comes packed with the latest Android Oreo 8.1. Redmi, on the other hand, runs its highly customized skin MIUI. While some prefer the neatness of stock Android, others prefer the tweaked features and a detailed discussion isn’t in the scope of this piece. That said, given the hardware that both the phones have, you aren’t going to see any lags in any of them.

This is exceptional- Asus has not just matched but beaten Xiaomi at its own game. While the 4GB variant of Redmi Note 5 Pro retails at 13,999, Asus has matched the same specs at 12,999!

If we talk strictly about the device, there is only one reason you should opt for Redmi Note 5 Pro over Asus ZenFone Max Pro M1– front-camera while the latter offers better battery and an additional space for SIM card. That is, if you want your phone to be more productive, ZenFone should be the ideal choice;though for those social media addicts, Redmi is the better choice.