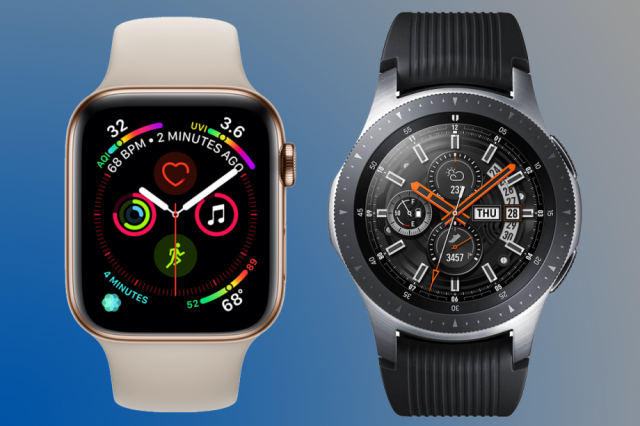 Years after their launch and subsequent refinement, smartwatches have finally started going mainstream and currently if you are out on the market to purchase one, Apple Watch Series 4 and Samsung Galaxy Watch remain top two contenders. But the obvious question remains- which one’s better? Let’s find out:

The first thing you’d notice is the shape of the dial- the square-shaped Apple Watch and the round-shaped Galaxy watch. Because it’s a matter of preference, let’s just put that aside. In terms of usage, the rotating bezel in Galaxy Watch feels much more sophisticated and convenient than the crown on the Apple Watch. But on the downside, Galaxy Watch feels much bulkier and might not be suited for those with a thin wrist.

For aesthetics, Apple Watch comes in Gold and Silver variants while Galaxy Watch offers Silver and Black options. However, you may get the Rose Gold color in the 42mm model. if you like to change straps, Apple offers a larger collection than Samsung but there are plenty of third-party options as well.

Both the smartwatches almost stand neck-to-neck when it comes to the features they offer that include:

But there are a few subtle differences as well:

Galaxy Watch is compatible with both iPhones and Android, through a few features like responding to messages is limited on iPhones.

Apple Watch has custom Pace alert that notifies you are ahead or fall behind your target pace.

Apple Watch also has FCC-certified ECG app and even a feature that would notify others if you take a serious fall.

This is a segment where Galaxy Watch is a straight winner. While Apple Watch delivers around two days of battery life under moderate usage, Galaxy Watch clocks almost 4 days. Through if you use LTE version for calling and streaming music, the battery life would be substantially low.

Overall, both the smartwatches being one of the best on the market are well-suited for most the tasks. That said, if you prefer round dials, want long battery life and an extra $100 in your pocket, Galaxy Watch is the gadget for you. And if you have no issues with the square dial and want full-featured health tracking, Apple Watch should be your preference.