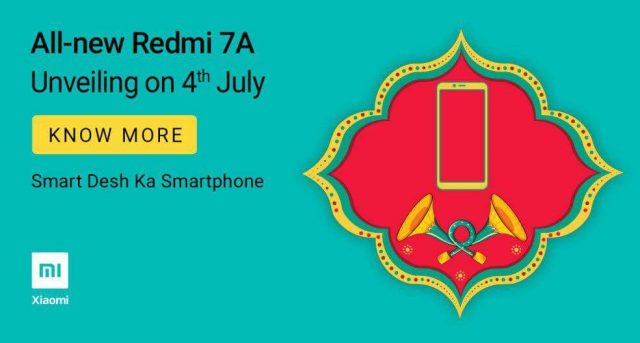 The Chinese smartphone maker Xiaomi is gearing up to launch a budget smartphone Redmi 7A on July 4th in India. India’s e-commerce company Flipkart has prepared a dedicated page which clears that Redmi 7A will be launched on July 4 in India. This smartphone has already been launched in China.

Xiaomi has been teasing this Smartphone’s with #Smartdeshkasmartphone hashtag for some time. According to the sources, Redmi 7A is loaded with better and impressive specifications and features for Indian users, which will be better than its international variants.

It will replace the old Redmi 6A and its price will keep within 6,000 rupees. The option of Notify me on Flipkart has been given so that users can get the information after the launch. It is possible that this smartphone is Flipkart Exclusive, but today the company is paying a lot of attention to the offline sale too, so it is difficult to say anything.

Speaking about the price of Redmi 7A in China, the starting price of Redmi 7A is 549 yuan (about 5500 Indian rupees). This price is for 2GB RAM and 16GB variant version, while the 2GB+32GB variant costs 599 yuan (approximately Rs 6,000). Although, the smartphone available in two variants in China. One of them has 16GB of memory with 2GB of RAM, while the other variant has 32GB internal storage with 3GB of RAM.

In India, the company can launch a single variant which will have 32GB internal storage with 3GB of RAM. However, Micro SD card support is also provided. Talking about the specifications of Redmi 7A, this smartphone is featured with a 5.4 inch LCD display, which has an HD Plus resolution.

The Redmi 7A will offer dynamic performance as it is loaded with the Qualcomm Snapdragon 439 processor. The smartphone is equipped with a 13-megapixel camera at the rear side while 5 megapixels at the front end for a perfect selfie. Its battery is 4,000mAh and it will be equipped with a 10W charger. This smartphone is run on the Android 9 Pie-based MIUI 10, which is Xiaomi’s latest custom OS.